It was an honour to know him, Mr. Donleavy that is. 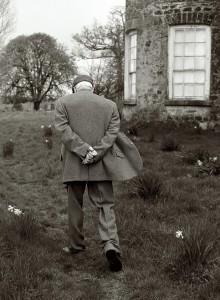 Tradition dictates that when someone you know dies a few words are shuffled about by way of condolence or appreciation. I’d like to shuffle my few here to mark the recent passing of JP Donleavy.

To me Mr. Donleavy was always that, Mr. Donleavy. Never did I know him as Mike or JP. Not that I wouldn’t have taken the liberty of assuming friendship, it’s just that he had my greater deference as a true creative. Although Ireland is a county littered with artists it has few masters. He was one of that few. Originally New York born, for whatever reason (and he always half-jokingly said it was for the tax laws) he decided to make our country him home. If you think about it, what better place to get the the headspace to write than the wilds of Ireland behind the falling walls of your own estate. Which is exactly what he did, once the money started rolling in.

Oddly, given this vantage point, his novels and short stories were mostly urban affairs, their protagonists sophisticated urbanites. In ways, and this was no surprise either, Mr. Donleavy was always in his own head – it wouldn’t matter where he was. This is meant as a compliment. His mastery of the written word, and his imagination, was supreme. Unmatched in his class. He required no external influences to oil his own talent. One curious afternoon I looked at all the spines of all the books resting on the extensive bookshelves of his writing room. Just to see what he may have read, what authors might have been an influence. What did I find? Every single volume – and there were hundreds, if not over a thousand – was by him! The various editions of his works published world-wide in the many languages of six continents. Not one book by another author. This entirely self-contained self-referencing spoke of the absolute assuredness of his own talent. Of course, on the downside as regards conversation, if he wasn’t talking about himself, or you weren’t talking about him, he wasn’t listening. Ordinarily one wouldn’t put up with such station for too long but his stories were always worth the listening. They were enriching, and a pleasure. He really could tell a story.

It was about fifteen years ago that I first met him, even then he was in the later part of his life. The meeting was arranged by an old art world acquaintance, also now dead, who had known and worked with Mr. Donleavy years before. Of course we had to go to see him, he rarely left his estate. The world Always came to Mr. Donleavy. Living in London at the time, and with lack of adequate banking facilities, it was required that we drive all the way over in my battered and heater-less gun metal grey 1960s Mercedes. What I didn’t know before setting out was that my acquaintance was an un-self recognised alcoholic. It was his reasoning that if he drank only in public bars then he wasn’t an alcoholic, rather just a man in great social need. He also had this other thing, he would drink only from half-pint glasses. He found pint glasses inelegant, so inelegant that he could hardly bear to look at them, let alone hold one. An aesthestite I suppose we could call him. The trip took three days. Interestingly he’s one of the few men I know of, in fact the only man I know of, who was killed running behind a bus.

Anyhow, eventually, we enter Mr. Donleavy’s drawing room to great welcome, my co-pilot was indeed a friend from older days. My first sight of him? On one arm of his armchair sat a Japanese girl. And on the other, another Japanese girl! Two Japanese girls in Westmeath straight off the plane. They had just read The Ginger Man and decided on the instant to make the pilgrimage from Tokyo to Levington, turning up unannounced at his locked front gates. Having read the book in Japanese they had not a word of English, mostly they just fawned and giggled for the evening. Not an unpleasant distraction on a wet mid-winter’s night as the rain hit the other side of the panes. The world as I said came to him – he had the draw, he had the ‘it’.

Soon after this internationalist start we did some work together in London, Dublin and New York, with me working as a wildly unsuccessful art dealer and gallerist. Of all the artists I worked with, three or four always got well reviewed, both in England and Ireland. Mr. Donleavy however was the only one who got internationally reviewed. Always. He was a talented painter – and I don’t mean talented in a ‘and he did this as well’ way. It was recognised that he up there with the greats, but chose a different path. He did say to me once that he chose to pursue the art of writing as he found paintings once completed, too silent, too mute in their message. Once he’d decided on writing full-time, it was mostly only in the evenings that he’d take his pen for a walk, for distraction, just to give his mind a rest. Had he chosen instead to give himself to paint, I can assure you there would have been many, many more museum shows in his lifetime.

Later, when things came a cropper for me, in both my personal and business life (entire misuse of the word business, over-compliments a more than dismal performance as an art dealer) I moved back to Ireland. For about five years, before I managed to get busy again, I’d regularly visit Mr. Donleavy, more or less on a weekly basis. These visits, when I look back on them now, are privileged memories. We never spoke of writing, or art. Rather it was of life; women and love, and not love, cattle, trees, stone walls, boxing, New York – whatever happened to drift along into the conversation. The fun was just bouncing that conversation off him. He never refused my visits, even though I’m sure my company was as dull to him as his was fascinating for me. Looking back, it was very kind of him to put up with me. What I also discovered was that he was an incredibly sensitive and perceptive man, a true artist naturally born with the tools of artistic expression. Nothing had to be taught to Mr. Donleavy. In an odd way he was wise while at the same naïve. In speech his words were always measured, while in act he was always beautifully mannered. Now that our conversations can never happen again they’ll be missed the greater. To misquote Dickens, from the worst of times came the best of times.

I’d like to also take this opportunity to tell a true story, to a word, which captures Mr. Donleavy’s perfect wit.

During these years, while drinking at the bar of a certain Dublin member’s club and running low, I was approached at the counter by a young man who knew that I had something to do with Mr. Donleavy. Describing himself as a ‘serious writer’ – whatever that is – he pushed it upon me that he was working on his opus. Congratulations to him I said, keep it up, that sort of thing. But then he offered to buy me a drink, which sort of changed things. After my carefully seeing that the barman was paid, he then asked me if I would possibly show the finished manuscript to Mr. Donleavy, in hope that he might possibly write a few words of recommendation. Knowing full well that Donleavy would just not be interested (but being the terrible man that I am) I said to the young man, not only would I show it to him but for the price of another drink I’d actually ask that he read it as well. The world soon became a happy place. Drink, drink, and drink on more drink, with not a note out of my own pocket. He was exultant that young man. Always encourage the young is what I say. And that was that. Carefully avoided him for the next two years.

Thought no more about it until when on my way out the side-door of a Dublin public house worst nightmare occurs. A very exhausted looking man, now suffering from alopecia and wearing a dirty black turtleneck jumper (why do they always wear black turtleneck jumpers?) rushes at me while at the same time delving into a plastic shopping bag. Feigning unrecognition my attempt at making getaway was thwarted by his physically blocking the doorway. Nail-bitten fingers produce an unedited manuscript of telephone book thickness. Absolute worst nightmare. He then holds it towards me, reminding me of the money he could ill afford spent feeding me drink that night, his suspicion that I’d been avoiding him since, that a promise is a promise, etc, etc. All that honour stuff. So, with what honour I do actually have (pitifully little as it happens) I put the telephone book into the boot of my car promising the promise. Awful.

The following week casually bring it up in my chat with Mr. Donleavy. According to literary circles in Dublin I say, rumour exists of a possible new Joyce in our midst. We could have, if word is to believed, a young writer of such promise that he might actually change how we all look at the world, etc and so on.
“Really?”, he says.
“Yes, and not only that, I was lucky enough to actually meet him and snatch his latest manuscript out of his hand”
“Really?”
“Yes, and not only that, but it’s also said that it’s going to be a publishing phenomenon. Possibly if you were to have a look at it I could maybe arrange, now it won’t be easy, there’ll be plenty of other big names, but I could possibly arrange to get a few words of recommendation from you mentioned somewhere”
“Really?”
With great shallowness I went on, “Yes, and by great chance I actually happen to have it in the boot of my car”.
Mr. Donleavy, who must have been approached one thousand times in his life for the same request saw right through it.
“Show it to me, why not”
Quick whip outside and one rushed minute later I’m handing it across the table. His eyes widen at the thickness as he holds it in his outstretched hand. He just sort of looks at it, weighs it in his hand, then passes it straight back to me while saying only three words. It then immediately goes back into the boot of the car, not another word on the matter. We open the better wine and that’s that, off we go on our conversational meander. Not what I expected, but there you have it, life’s a learning curve.

The next week I meet the young nail biting man, say my piece, hand back the manuscript and move along. No more about it, until about six months later walking down Dawson Street. There it was, published. In the window of Hodges & Figgis. And on the cover the immortal line, ‘World Famous Author JP Donleavy says, “Worth it’s Weight” ’.

It was an honour to know him, Mr. Donleavy that is.